Of Ears and Holes

Wait, this isn't actually exciting because it's just another hole right up the one I already have in my left ear.
To make it easier to understand, as I always felt weird explaining in words everything considering holes in ears [lack of vocabulary for the subject in each language I speak?!] I shall divide it:

But there's more to it. Since I do everything on purpose and even my most random and awkward decisions have a meaning for the past couple of years I've had a plan considering ear piercings. I am going my way up on the ear and planning to have an industrial in both [until I'll reach the top of each ear] only to later on put safety pins inside.
Why? Because it feels right. I honestly hate those small feminine earrings with cute shapes/ shiny shit  because it's meaningless to me. Ever since the Punk Subculture you had the unforgettable "safety pin instead of normal piercing" representing something people misunderstood and that fascinates me.
On the other hand, it's really not that complicated. My ears made it through a lot of trash instead of normal earrings, I'm not allergic to anything and had no painful or inflammatory reaction ever! So I'm proud they serve [and will] the following purpose: 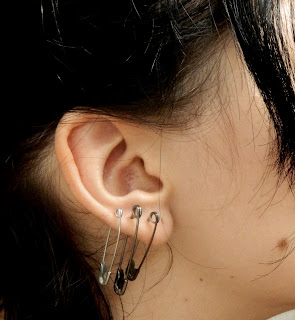 right ear, the higher safety pin is rather new hence that hole was done not long ago. 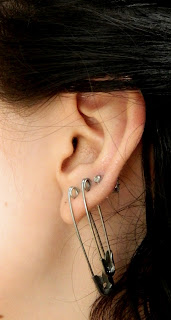 left ear with the new friend!

I am planning to go like this all the way up as I said. the lower hole of each ear is served for different earrings I make myself mostly, or for some fancy chandeliers, about which I will make the next post!

Fun fact: A LOT of people think I am always in pain when they see the safety pins. Like how exactly I should constantly be in pain if they are wearing a bunch of earrings themselves? Also a majority of geniuses think I actually pierced the hole WITH the safety pin and it's just stuck there. What kind of deviant fantasy is that?!

Party went better than we expected!
There weren't a lot of people and in general there was a good atmosphere! There were some elders [not elder Goths, there is no such thing where I live] that had fun as they said and some random people that stopped by to rest from the lower hall [NuMetal and Dubstep, yay...] that seemed to enjoy the gloomy, dark and rythmic atmosphere we created.
Fun fact: people like to dance to known and well overrated almost poppy songs, whereas when something energetic but new is played, they rather sit in the corner and wait. Why, people? Why? I mean, if it's something new doesn't mean you have to close your minds to it, open up! We played here and there less known artists such as Neva, The Names and others and people were confused. Very very strange for me.

I have to admit that I was disappointed. You see, people that come to Dark 80's parties are mostly over 30 and the only reason they come there, what seemed to be, of nostalgia. What I felt from observing the, and my conclusions after that wild night, is that people less want to open up to new things from the genre they love, but it is to hop around to catchy songs of Bowie and Joy Division, which are beautiful as they are, but perhaps somewhere overdone....
I also got really mad [I always get mad at stupid things that only I care about] that none of the people me and Boris know showed. Not our best friend who lived upon 80's music stating he had no chance to change his shift that night, not other people who could show up and had the cars/ money to get there and support, didn't.
I got upset, but I knew it was foolish of me, hence me and Boris always support every little artsy fartsy things that anyone is doing in our city, even if it's not even music we usually listen to, we still come and support the artist or the person organizing something because we feel it's important to show presence at little alternative events in out tiny country, because there is so little of everything, not to mention people within the [nonexistent] Goth subculture.
But in the end, fuck everything, I say. it was a party for me and Boris anyways. 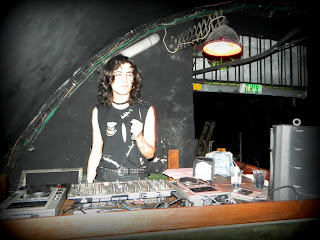 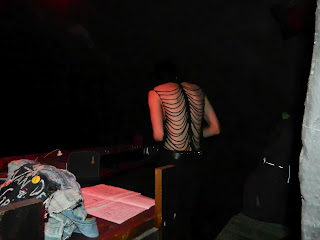 I can proudly say that I customized Boris' shirt myself ^^ 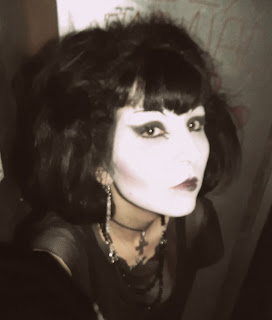 Makeup and hair were successfully charming this time. Stayed perfect all 6 hours! And my hair stayed up the whole night for the first time!!! 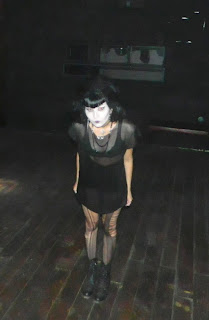 My white makeup next to my tanned skin lol 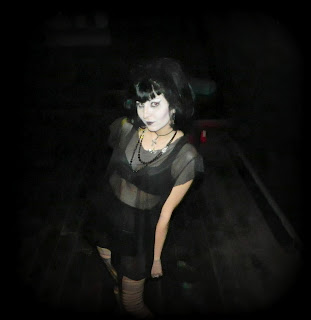 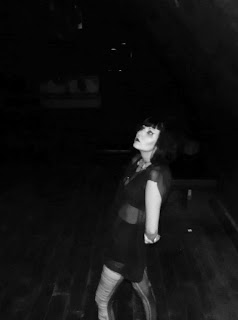 This friday is very special for me and *Boris.

This is the story:
A local club that once had Dark 80's parties asked us if we wanted to DJ 80's Goth and Post Punk, hence we asked the owner of the line why there aren't any 80's parties lately.
So we agreed! And today we'll gonna make people dance to everything but mainstream music, especially mainstream 80's music ;)

This is really exciting because among the EBM parties around where we live, we only enjoy 80's parties the most because the feeling when THAT song that you've had for ages on your iPod is being played at a local party is the best feeling there could be considering Goth music.
I mean seriously, it is so hard to explain the happiness and excitement when the DJ plays your Siouxsie Sioux, The Cure and even, oh my- Xmal Deutschland!

So we said to ourselves we're gonna play all "our hits", meaning- the songs we like no matter if these are bands people barely heard of.
I don't care even if we'll have a crown tonight, because you see, the party is divided: first floor preserved for Metal Core, Dubstep and other things I don't even want to think of, and the second floor- is ours! :)
I only can say: Fuck it! They wanted an 80's party, they shall have it from the bottom of our Trad and morbid hearts. Applause for extra cheesiness!

I only want to make an example of the things we would play today, because I'm so happy ^^

This and many others well known and less known. Pictures and even videos will be of course posted!
Gonna go backcomb!

* Boris is the name of my beloved boyfriend with whom I share almost 6 years of love. His name will be mentioned a lot from obvious reasons :)
at 24.8.12 2 comments:

Gothy finds and my complication with Anne Rice

The past week I have been sick, which was a great opportunity to skip work a little bit because I haven't been on vacation for a while. Much of laziness I admit...
I'm netter now, than god, cause being sick in August is in no way better than being sick in December...

So lately I have been craving to read a really good book... aside from classics I'm still dying to read but haven't got the time/money/energy/keep forgetting, I managed to find two books that were on sale.
First off is "The Prague Cemetery" by Umberto Eco, which I have no idea who or what it is but due to the story taking place in the Eighteenth century I have the feeling I will enjoy this. 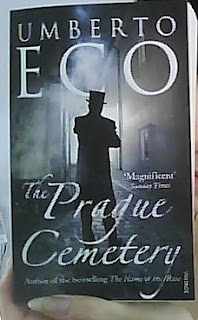 Alas, the obvious reason for buying a book that has the word "cemetery" on it. I'm so easy..
The second one is "Of Love and Evil" by Ann Rice, which happens to be the second of her "The Songs of the Seraphim" series, the first of which I own in a Russian translation. 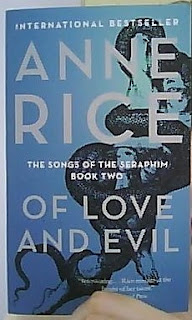 Now, here's my unfortunate story with Mrs. Rice:
I adored her Interview with the Vampire, the book was amazing and I've also read Pandora from the vampire series that was enchanting as well...
But since then....
I haven't finished a single book I've tried to read by her. Not the first from The Songs of the Seraphim, which is pretty interesting, but when I almost got to the middle I dropped it for something else and completely lost any interest :(
Also the witches series, Angel Time and even The Vampire Lestat had the same story.
It is annoying for me because I really like her stories, characters and style, but something just prevented me from keeping on going and drowning in the book completely. A mystery I cannot solve..
But I decided I'll give her a chance. Because she is an amazing author for me still, and it is important for me to read her.

Also today I found this skeleton guy, that was so cheep it was ridiculous not to but him. He has a candle inside ^^ 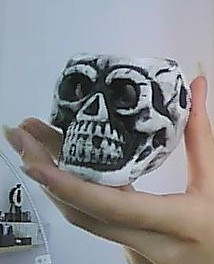 Ok, so I've been trying to open and re-open a blog here, and after failing successfully I've decided to attempt it again! Ha! And this time perhaps it will work.

This is the story:
My name is Maria but you are welcome to call me by the nickname to the left. I have been writing a blog for ages now in a different website since I was 13, but due to age and style development I've decided to go for gold at Blogger!
The thing is, that older website is kind of for teenagers, for the sake of that matter for preppy teenagers, I mean there aren't any Babybats even left! the horror...
So due to my obvious difference in level and mind I decided to start seriously blogging here, hoping this would work, and that people would read me! Because I've enjoyed so many good Goth bloggers so far on this website.

Speaking of Goth!
So yeah, this ought to be a Goth blog, as simple as that, mostly featuring myself and the shit I am usually doing. I adore DIY so I will be posting my projects here, also sharing the music I love and subjects regarding Goth that I am in to.
Cheers to Goth and a brand new start! Wish me luck~ 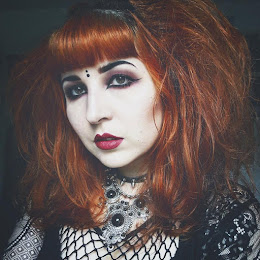 Hej, I'm Maria. I love various music genres, subcultures, languages, and queer-related things.
I moved to Berlin 4 years ago after growing up and living most of my life in Israel.
This blog is pretty much about that.
Feel free to snoop around.
Don't be shy to leave a comment!

☥ Someone found this entertaining 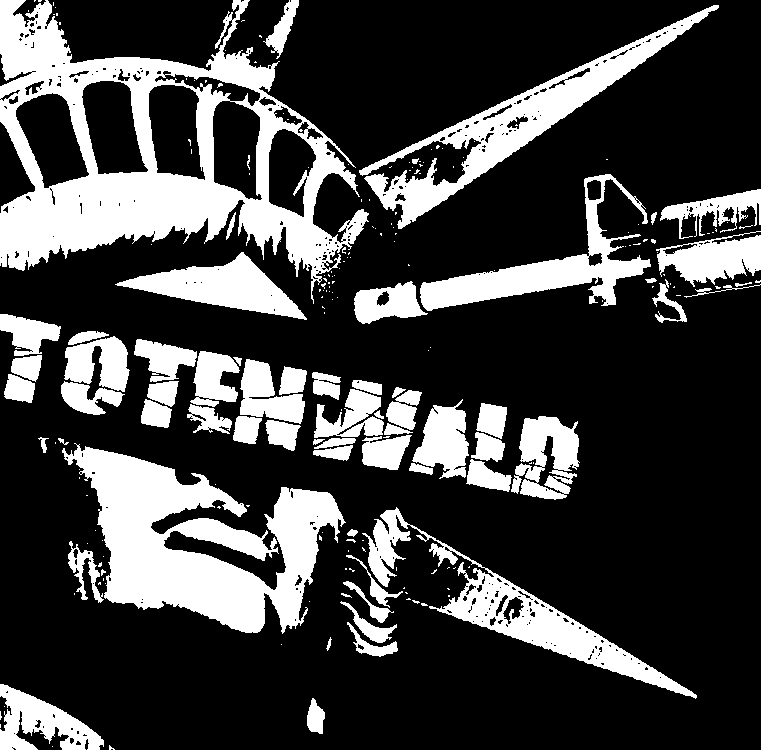